“It’s probably not too surprising to hear that retailers have doubled their year-over-year spend on Google product listing ads this holiday season thus far,” noted Ginny Marvin in a recent article published at Search Engine Land. Marvin also pointed out in her article that their was a  four-fold increase in revenue that retailers have realized from PLAs versus 2012, according to a holiday retail report from Kenshoo out this week. 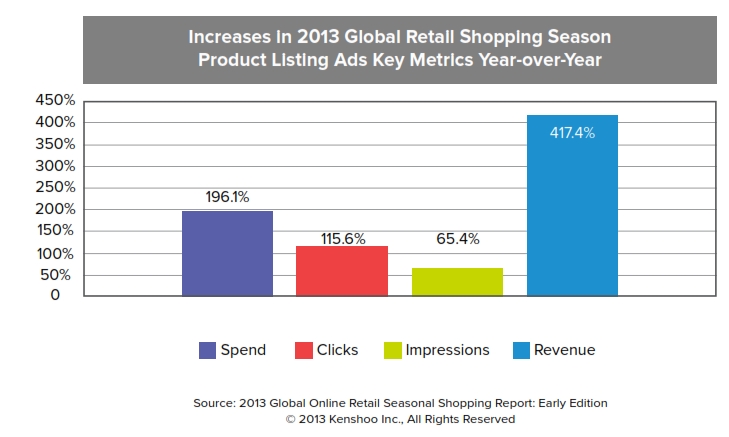 Return on Ad Spend (ROAS) reached $8.62 in the 26 days ending with Cyber Monday that were analyzed for the study. “Yes, PLAs delivered a nearly 9 to one return on investment in the early holiday shopping season,” stated Marvin

Also interesting is that impressions increased by just 65 percent, but led to a 115 percent increase in clicks for advertisers. The click-through rate rose 30 percent this year to an average of 3.3 percent globally, up from 2.6 percent in 2012.

PLA impressions and clicks peaked on Black Friday, with Cyber Monday trailing slightly behind the traditional kick off of the shopping season. Revenues also peaked on Black Friday. You can read the original article from Ginny Marvin at Search Engine Land and the latest press release from Kenshoo here at PR Newswire.

Need help getting set up?

Hi, my name is Nelson J. (Nate) Spoto Jr., founder and Director of SEO and Interactive Marketing at Local PR Media Group, a leading-edge division of PR Syndication. Our company is dedicated to helping local professionals and small business owners succeed in the online arena. I encourage you to join the conversation, stay connected and come back often to view the latest blog posts from top SEO experts, social media enthusiasts and public relations professionals.